Vancouver, BC: After the successful and blast launch last year, Vancouver will host the 2nd Halloween Parade and Expo from Oct 15 to 18 this year.

Starting at 11 AM on Sunday Oct 18, the grand Halloween Parade hits downtown Vancouver on Howe St (Drake to Smithe), Smithe St (Howe to Granville) and Granville St (Smithe to Davie). It’s the time when superheroes and super naturals from films, comics, anime and games all come alive, and it’s also the only parade in Canada that opens for individual Cosplay participants.

The event opens to everyone and attracted nearly 100,000 spectators last year, and welcomes artists, exhibitors and vendors to join the event.

Unlike the other bloody and scary Halloween events, the Vancouver Halloween and Expo went to a different direction and does not have any scary element. The event presents and produces arts, visual arts, dances and performances from diverse communities while reducing blood and gore themes to celebrate and sustain Halloween heritage in family friendly and healthy direction. The event is organized by Vancouver International Halloween Festival Society, a local non-profit organization. 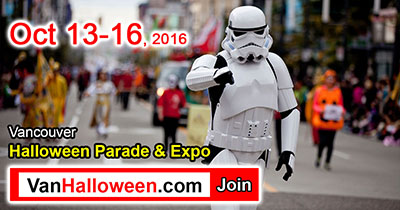